Beat-em-ups used to rule the world in the 90’s. Arcades were enjoying a daily deluge of new contenders to that Streetfighter crown. The 32-bit console generation was born with a polygonal battle fitting for the machines that powered them. The Saturn’s launch and early lead was due solely to Yu Suzuki’s magnificent Virtua Fighter.

Those days have faded and even though we still see incredible titles such as Soul Caliber, Tekken or Injustice 2, they no longer command the headlines or hearts as they once did. Ubisoft have reinvented the genre with For Honor, it is not like those forefathers but certainly has its roots in them. An historic battler is maybe not the first thought for a brand-new franchise but give credit for actually pushing new themes and not giving up on them immediately. With that we are now treated to an expansion to last year’s release in Marching Fire. A £25 or $40 upgrade to that or a complete full price digital release we are now treated to 4 new warriors from another Dynasty. This follows the same theme with the same single player story segment across the Vikings, knights a Samurai which teach you the way of the warrior as they intertwine.

As a relatively expensive upgrade I would have hoped to see new single player element for the new Chinese Wu Lin warriors but instead we see a few more modes. Arcade is a constant series of battles that are short and consist of you working your way up the enemy count, think of your standard pagoda battle from Mortal Kombat, a perfect Arcade mode indeed. The problem with this is that is does not offer much more than an offline battle mode you get from the MP mode. Talking of that a new Breach mode is also added which is a PvP mode at least. This follows from the single player section with you protecting a battering ram as it is pushed up to the gate OR defending it. My biggest issue is the mode can drag on too long and with all the NPC enemies and some other players it can almost feel relief when you win. I think they should shorten this mode and maybe add in a grand royal stand-off at the end with the last one/team standing declared the winner. These all bolster the previous modes that appeared in the previous release last year and can now be played with the fraction.

In a sad and constant trend in modern games you can unlock the other characters, clothes etc via good old-fashioned gameplay which add to your in-game currency. Of course, for the younger players you can just smash Mum and Dads credit card and buy them with real cash. I am not a fan of this and do miss the old style of just unlocking extra characters via completing tasks, completing the game or cheat codes, remember those. Old man yells at the cloud moment aside the cast of warriors does allow a variety of fighting styles which do vary between the slow lumbering, Knights and heavy Vikings, to the fast Monk, Samurai or female assassin which balance speed and agility over brute force and strength. With its 3-prong attack and defense mechanism allowing a great combination of battle which is required as you move through the AI enemies and certainly when players others online. This all plays almost identical to the base game and the new characters offer a suitable tweak to that, which I covered last year across all versions.

Performance wise it is as consistent if not slightly more so here with the XboxOne and X versions I have here for review all targeting and succeeding at the 30fps rate pretty much locked. Helping this out is an adaptive V-sync that allows the screen to tear occasionally when the 33ms frame-time is missed, this only really happens during the real-time cutscenes and even then, are very, very rare. No concerns on that even though a 60fps rate would be preferred for a fighting game it at least keeps a near lock on that which is the most important element for a battler, the PC version does obviously allow this if that is your platform of choice.

Visually we are looking at the 2 ends of the console space with the S model here delivering what looks to locked 1728×972 but this is backed up by a Temporal AA element from the Anvil Next engine which is under the hood. This has a reconstruction element that can give higher counts but I think we are looking at a fixed resolution rather than a dynamic one here as the TAA softens the image very quickly which is further softened by the intense chromatic aberration across the frame. I can see the aesthetic choice here and it can work, just not all the time. An option to disable this effect on consoles would be appreciated by me. Texture quality is good but not great for such a small, linear title with very obvious low bit and resolution textures used that can look stretched and blurry during gameplay and close-up cinematics. HBAO is at again used which delivers a great depth and solidity to objects and geometry in the game offering a strong occlusion to recess areas that removes the screen space artifacts we normally see from the screen space version. Filtering is good as is lighting with bloom elements and sun-rays that break through tree lines and buildings. The common or garden cutbacks are used with half-rate effects in the background such as the smoke effects which all help to keep the performance as solid as it is.

Something that really adds to the smooth motion and high-quality look and animation is the per-object motion blur. This is an effect I have stated for a while now that the Assassins creed titles such also include, as I think it would really help smooth that games clunky at times, animation system. We can see here with For Honor that the engine not only supports it, the quality is very good and just emphasizes the fluidity the motion matched animation system the game uses. You may have heard much about this with The Last of Us 2 E3 gameplay that I covered earlier this year. Even though it put the incredible data driven animation system on the map, this game was the first shipped title to use these node-based blending animation systems. It enables the team to motion capture multiple sets of movement and the engine determines in real-time what sequences will work best and then blend one from the other and even mid-sequence. The benefit of this is huge, adding unique looks across gameplay and far more organic motion and mixing up that takes into account motion vectors, Inverse Kinematics, ray-casts, momentum and much more. It even allows teams to ship a game now and then create more motion sets at a later date and simply add them into the game later via an update which will add to the repertoire the engine can use from enhancing the realism further. 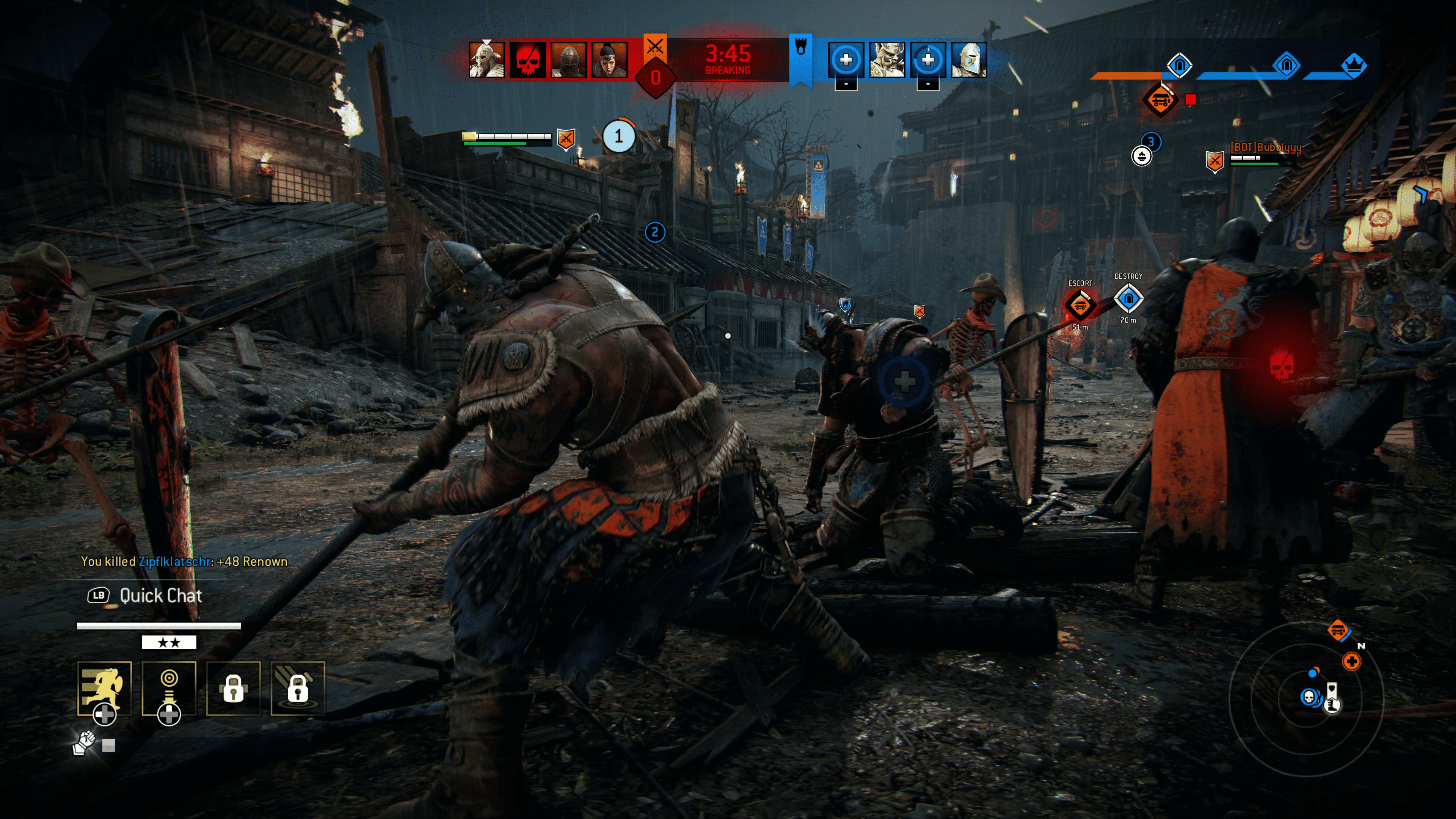 A fighting game such as this is a great way to show this off and although the technique and blending methods looked better from Naughty Dogs use, these are still some of the most fluid animation routines in modern games and a step up over the clunky shifts and jumps we still see in Assassins Creed. Last year’s Wildlands also support this technique and although much better than AC titles For honor ,IMHOP, still shows this off to a better degree. My only gripe is that even the faster fighters such as the new Monk have a slow, weighted feel to them. I would love to see a hand to hand fighter use this technique with the closest we have seen in EA’s UFC titles which support a similar animation method but not the same. The excellent animation and POM are a big reason this game looks so good and even though this new update also ships with graphical enhancements which include a refinement to the Global Illumination system, the varied texture quality, low polygonal models and strong diffuse PBR material system do let the overall visual quality down compared to some other titles. The Large characters and arena’s do go some way to explaining that.

The X does exactly what MS designed it to do and take the very same visual quality and effects and x it by 4 which increases over the S resolution to 3456×1944 which again is then covered with a Temporal AA element which reconstructs the image and smooths out the breakup at the expense of sharpness. This results in a game that looks close to native 4K on a UHD screen and is instantly sharper than the S model, even if the TAA and CA can reduce the leap in resolution slightly. The performance as covered before is also mirrored here showing that the X is literally 4x more powerful than the S with no other work being required. I would assume that this was the most efficient use of the extra GPU and memory resource here, which is also nicely bolstered with a 4K texture pack. This, sadly, does not resolve the low quality textures in the game and seems to simply deliver 4K version of them across main characters. Comparing the S to the X here with the texture pack installed shows off the resolution increase as much if not more than sharper textures. You still have low resolution ones appear on the X in many segments so do not expect this pack to resolve those. The other let down is the pre-rendered video files are still in 1080P and look very compressed, muddy and dark compared to the real-time ones and this is stark shift on the X. It would have been worth the effort here to re-render them in 4K and at a higher Bit-rate even if they are a download pack like the textures for those that do not care.

In the end this is an expensive expansion that does offer up a few new modes and uses the X well without adding a great deal to the core game. For £5-£10 less I would have thought it offered a fair price, but the Arcade mode will likely be ignored by most, the Breach mode is not exciting enough to warrant the price and the new warriors although good really deserved their own story to introduce them properly, but the animation system is the real star here for me. The only problem Ubisoft have is the core game has all these already and can be picked up for less than the expansion and as much as I enjoy the game and these new additions, my recommendation is to pick up that instead of the Marching Fire edition as it offers the same tactical combat, PvP and identical story portion for much better value and I do wonder who this expansion is aimed at aside the very hardcore player base.