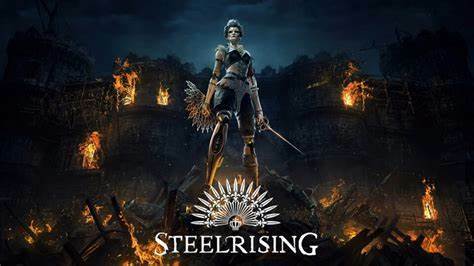 Posted on September 22, 2022 by Michael Boccher

Steelrising sets itself apart from the Souls-likes by doing what Spiders does best, adding its own unique elements while preserving what is best about the genre.

Steelrising is the newest RPG from Spiders that takes us through an alternate version of Paris in 1789. If you ever sat in World History class wondering “What if King Louis XVI had killer robots?”, then Steelrising is for you. The story sees the King mad with power unleash his army of killer robots on the citizens of Paris in an attempt to squash the revolution. The Queen, Marie Antoinette, is in hiding after witnessing her husband’s sycophantic behavior. She sends her most trusted friend and robot, Aegis, to assist her in ending the rampage these robots are causing.

As Aegis, we will need to find the Queen’s missing children and heirs to the throne as well as locate the creator of these killer robots (called automats) Eugene de Vaucanson. You will need to end the robots for good and see that the King is brought to justice. The game begins in a linear tutorial area that is just open enough to give you an idea of what to expect once you hit mainland Paris. There are massive city streets, hidden areas and gear all over which encourage exploration and side quests you will find yourself yearning to complete. The art style graciously recreates the city buildings and locations to a T as well. The Louvre is one of the most beautiful buildings in the world. Seeing it flawlessly reconstructed and maintaining its luster in the game’s steampunk-esque environment, while also being partially set ablaze and overrun with killer robots was a great testament to the lengths Spiders went to in creating the world of Steelrising.

One of the staples of any RPG is side quests. Steelrising limits the number to around a dozen or so, but they are mandatory to anyone wishing to learn more about the main story. Spiders’ last game Greedfall saw many quests that, while they had impressive stories alone, were not tied to the main game itself. Steelrising capitalizes on this by allowing them to help Aegis better understand her main objective. A good example is the variety of characters themselves. One of them is the Marquis de Lafayette, who in real life was instrumental in aiding and getting the Statue of Liberty to America from France. The story of Steelrising mentions this as part of its progression, while also allowing for the Marquis’ side quest to directly tie into the main game. The proverbial quests which see us escort a random person or bring a completely unrelated item from point A to B do not exist. Having everything tied together added to the immersion of Steelrising in a way that was refreshing for the genre.

The combat is like most games in the genre. Stamina is a thing and properly timing your attacks is a must. Like Spiders usually does, they add a little something different to allow Steelrising to stand out. Since Aegis is a robot, she will begin to overheat once her stamina is depleted. We do have the ability, with proper timing, to allow her cooling system to restore some stamina. There is a risk, however, of taking some physical damage by doing so. It’s a welcome addition that allows for more depth to the game as well as accessibility for all players. There are alchemical attacks that inflict burning, frost, petrification and lightning damage to enemies. Of course, Aegis can also receive said damage from enemies.

At no point in Steelrising did I become bored with the variety of available attacks at Aegis’ disposal. Armored fans, muskets, swords and hammers all have their usual light, heavy and charged attacks. In addition, every weapon has its own special move. Fans can turn into shields, swords can allow for a tornado attacks, hammers can be used as firearms while some can be used to automatically counter attack after a parry. Your weapon of choice will need to be wisely based on your playstyle, chosen build and upgrade path. Tanks may prioritize health while dancers will need to start with immobilization.

The most welcome feature in Steelrising is the ability to pause during combat. While newcomers to the genre will appreciate it, hardcore Souls-like fans will also be able to maintain the usual status quo should they choose. To put it in perspective, fully upgrading your character will cost about 25 million anima essence, or souls for you FromSoft vets. And no, that is not a misprint.

Simply pressing the menu/start button will pause the game. In this menu, players can simply use it to take a quick bathroom break or adjust in game settings. Steelrising affords the ability of an assist mode, which allows players to change various settings to how much damage you take or go so far as to not lose your anima essence (the souls of Steelrising) when you die. Doing so does eliminate the ability to earn certain achievements, and the game makes you aware of this before you confirm your choice. Those use to the combat and difficulty still have the same type of menu available to them. You can bring up your inventory menu and swap items if you’re quick enough to avoid the enemy. It’s this variety and level of accessibility that really adds to the immersion available in Steelrising. Whether you want to maintain the classic level of difficulty the genre offers with the combat, or go with a more accessible approach by utilizing alchemical grenades and bouncing Aegis around, there is something for all skill levels in Steelrising. A New Game + mode will also be released on September 29th for an even more difficult challenge.

If you’ve played Technomancer and Greedfall, you will notice that Spiders follows the same path with Steelrising where cut scene animation is concerned. The voice acting is intense and emotional, but it doesn’t match the still present wooden soldier type movement and stiff facial animation. On the flip side, the art direction and combat variety are a first ballot winner. The camera movement has its moments where it may get locked in a corner, but sensitivity adjustments are able to eliminate most of these. Like Spiders always does, however, they add their own, unique twist to the genre that allow their games to stand out amongst the rest. The ability to pause the game and offering the risk v reward features such as the ability to restore damage at the possible cost of health shows that the studio is never afraid to try something new while also maintaining what they are aware made the genre great in the first place. This allows Steelrising to stand out in what is the craziest yet most bad-ass setting I’ve seen in an RPG in a long time.

Steelrising is available now on PC, Xbox and PlayStation. Both action-RPG and Souls-like fans will see this as a must play in order to maximize their experience.