Super Smash Brothers has always been a wildly popular franchise that Nintendo has had at their disposal. It is one of the few games today that still allows local couch play, allowing up to 8(yes 8!) players to now battle it out on the same screen. Having characters from almost every Nintendo franchise makes this game an enticing purchase, and with 50 characters, the roster is varied and exciting. Veteran fighters like Mario, Link and Pikachu all make the jump to the latest version, while newcomers like Pac-Man and Mega-Man join the fight! Having all of these characters wouldn’t mean anything if there weren’t anywhere to duke it out with them, not to worry though, as the game features a total of 46 stages to battle it out on. That’s a whole lot of content, and we haven’t even gotten into the actual gameplay yet!

If you’re familiar with the Smash Bros. franchise, then the gameplay will feel just as you’d expect when you sit down and start playing. The goal of Smash is to knock the enemy opponents off of the screen using whatever methods you can. This could be as simple as fighting them with your characters moves, or using items that can randomly appear during the battle. There are hundreds of items that can appear at any given time from a huge list of franchises. These include old favorites like the powerful Hammer, and new ones like the boss from Galaga! Also, assist trophies make their return, allowing players to summon a random character to aid them in battle, including a Nintendog, Skull Kid from the Zelda series, and even Shadow the Hedgehog. The amount of things to see and do in the game is truly overwhelming, but luckily the game has a great UI that allows for easy access to whatever it is that you want to do. 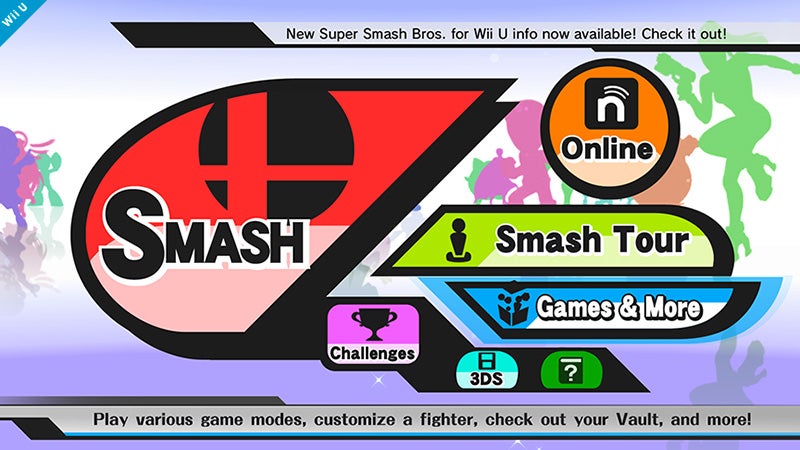 Along with local multiplayer, online multiplayer makes its return once again and allows up to 4 players to battle it out from around the world. When you go online, you are greeted with two options, ‘For Fun’ or ‘For Glory’. If you choose ‘For Fun’, you’ll be placed in a match with a few random people and just battle it out exactly as it says, For Fun! On the other hand, choosing ‘For Glory’ is a much more competitive experience. The stages that are chosen are all flat, and no items are allowed, it is meant for very serious players who are looking for a bit of a challenge.

The game features a wide variety of modes, many which have been around since the series’ first title for the Nintendo 64. The main mode is simply titled ‘Smash’, and choosing this will allow you to quickly get into a battle and choose whatever setting you’d like. If you’re a fan of having the rules set for you however, you can hop into Classic mode and take on waves of enemies leading up into a boss battle with Master Hand. Or if you want even more of a challenge you can hop into ‘Events’ which are premade missions each with a certain objective and set rules. For example, the event may make you play as the Mario Brothers and have you defeat Bowser in a certain time limit. The harder the difficulty, the better the rewards you get. A new mode titled ‘Smash Tour’ is also present. This mode allows you and 4 friends to play a board game which has power ups scattered around the board, collecting these helps increase your fighter’s stats, which can be useful as various Smash battles will occur during the game. The mode is a good idea, but I wasn’t able to thoroughly test it solo and I feel it would be much better played with friends.  There are also a variety of challenges to complete, each unlocking different things, including new music tracks, stages, characters, trophies, and even custom movesets for your characters and accessories for your Mii fighter. The amount of content there is to unlock is simply staggering, and it allows for a tremendous amount of gameplay time. The replay value that this game provides is absolutely incredible, and it definitely delivers on its $59.99 price tag.

With Super Smash Bros., Nintendo has also released a new product that accompanies the game called Amiibo. Amiibo are figures based off of the characters from the game and use NFC technology to communicate with the Wii U gamepad. Placing a Mario figure on the pad for example will bring the character to life on the screen and you’ll be able to train it to become stronger and level up a maximum of 50 times. You can then battle your Amiibo characters or have them assist you in battle. The Amiibo functionality isn’t really necessary and doesn’t do much to add to the experience however, but the figures do look very well done for the asking price of $12.99 each and have been a huge hit around the world. Even I’ve caught the Amiibo collecting bug and now have over 12 of them(help me!). When all is said and done, Super Smash Bros. for Wii U is a fantastic entry into the series. The amount of content in the game is truly incredible and Mr. Sakurai and the teams at Sora Ltd. and Capcom have put a ton of work into the title. When the title was first mentioned at E3 2011, fans were ecstatic to finally be getting some new Smash, and the long wait up until 2014 was a hard time for many Nintendo fans. The quality of the game exceeded many expectations however, and the game has been a huge success. Wii U sales have increased thanks to the brawler, and It’s put the console back in the fight and proves that Nintendo still has the power to win consumers over when they play their cards right. Nintendo franchises have a special place in many gamers hearts, so seeing them all wrapped up in one expertly crafted game is truly a beautiful sight to see. Super Smash Brothers is one of the Wii U’s finest and I couldn’t be happier to give it a 10/10.